The damn hawks are cramping my style 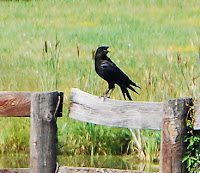 Let us begin with a picture of loveliness. How can you not love this crow? And yet, something lurks above, threatening this bird's freedom to roam.

Earlier this summer, I heard shrieks coming from an overgrown area of the farm. It was a hawk hatchling, crying for its mother to bring it food. This went on for a couple of weeks. And then one day there were two hawks in the sky, one smaller than the other. That's when the problem started. They want to eat my crows. How dare they?!

In case you're just tuning in, I feed crows. They're so smart, I can't help myself. They're almost like people. Anyway, I didn't realize how bad the situation had gotten until one day I did what I always do: headed out with a bag of seeds and peanuts and called "Crow!" As always, the crows headed for my voice. They'll do anything for peanuts, the food of the gods.

I looked up and saw a few crows in the sky, heading toward me -- and right above them were two hawks. It was almost a crowtastrophe! The crows realized they were threatened, freaked and flew away. No one was hurt. The sad part is that for days afterward, they thought I was in cahoots with the hawks. I was like, "Me?! Me?! The guy who feeds you daily?!" But crows are suspicious. They can't help it, it's their nature.

So I had to rework my whole routine. The hawks had learned that me screaming "Crow!" meant delicious crows were on the way.

Shortly afterward, one of the crows -- the one in the photo, I think -- talked to me from the tree in front of my house. He spoke to me in the soft voice, the one crows reserve for friends. It's not the ugly cawing sound; it's very pretty. He was trying to tell me something. Meanwhile, construction workers saw me seemingly talking to the air and asked who I was talking to. I said, "a crow". They just shook their heads in pity and looked away. But I thought I understood the crow's message.  I knew what he wanted me to do.

He wanted me to be silent. So now I feed the crows without calling them. I just head out, they see me, and they come. No hawks at all. Mind you, they're still there. But they've discovered another food source: wild turkeys. I saw them swooping down on a group of 10 or so unfortunate hens. Jeepers. But at least it wasn't my crows.

This has been your slice of crow/farm life. I hope you enjoyed it. As for me, I gotta go feed the crows. And you can bet I'll be silent as I do it. 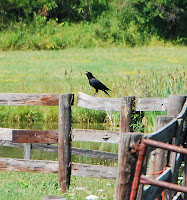 I broke up with baseball tonight

It's true. The relationship is over. I was watching my team as they opened the ninth inning in a tied game, and instead of worrying and hoping and rooting ... I realized that I don't care anymore.

I deleted the game without seeing the final inning and canceled my upcoming recordings of Nationals games (and Mets games, for that matter). I threw my Nationals keychain and my Bryce Harper T-shirt in the garbage. I'm not going to record baseball or check scores or glance at the standings ever again. I'm not going to talk about baseball or think about it.

It was a great relationship for a while. Don't get me wrong. In my heart, I wish nothing but the best for baseball. I hope it finds another fan to replace me.

Email ThisBlogThis!Share to TwitterShare to FacebookShare to Pinterest
Labels: baseball, breaking up, end of relationship

Interesting op-ed today in the NYT. Rabbi Mark Sameth asks Is God Transgender? Much of what he said was new to me. Thought you guys might like it.
Posted by writenow at 12:25 PM No comments:

We don't need to recount Trump's insane behavior here. I'm sure you're familiar with his lunacy by now. But here's the thing: if Trump bows out just before the election, whoever the GOP puts in his place will beat Hilary easily.

Trump will get what he wants: continuing attention and quite probably a flagship show on Fox (plus the ability to sell useless items to stupid Fox viewers and other imbeciles on his mailing list), and the GOP will score a most unlikely win.

People just don't like Hillary. Given any seemingly sensible alternative, they will vote against her and thereby elect the GOP apparatchik.

The second amendment threat that Trump issued yesterday may provide the perfect means to drive him off the ticket. And he won't care at all.

This is frightening. But our country has been terrifying for many years now. Remember, one of the major parties had no problem putting Sarah Palin a heartbeat away from the presidency. In a country this ignorant, anything can happen. That is the ultimate scary fact of our times.
Posted by writenow at 2:46 PM 1 comment:

That Marco Rubio sure is kind


Sen. Marco Rubio said Saturday that he doesn’t believe a pregnant woman infected with the Zika virus should have the right to an abortion — even if she had reason to believe the child would be born with severe microcephaly.

“I understand a lot of people disagree with my view – but I believe that all human life is worthy of protection of our laws -- and therefore I pledge that I, and my fellow Republican nitwits, will take in all the unwanted Zika babies and care for them in perpetuity."

Watta guy! At least we won't have to worry about the poor, microcephalic children. And if you think about it, it's a win-win for them. The GOP could raise them up to become the next group of super-Republicans. After all, they have to find a new pool of voters somewhere. It's either this or the snowflake babies. Because people who are fully conscious will never vote for them again.

They sure have a keen moral sense, these Republicans. I mean, you never see them falter when faced with a tough choice. I guess their gods tell them which choice is the correct one. Let's hear if for their gods: (Insert rude noise).
Posted by writenow at 2:58 PM No comments:

Francis gets it backwards

Pope Francis is totally confused about sex, which is no wonder considering the strange sexual rules of his faith. He can't get a handle on what's occurring in modern times so, like Fox News, he jumps in and spews nonsense.

VATICAN CITY — Pope Francis has lamented that children, as he puts it, are being taught at school that gender can be a choice. Francis said: "Today, in schools they are teaching this to children -- to children! -- that everyone can choose their gender."

Of course, what's being "taught" -- largely through experience and media coverage in the US -- is that there is no choice regarding gender. You are what you are. And sometimes what you are is a person trapped in a body of the wrong sex. It's not surprising that this happens. Some people are physically intersex. They are born with both female and male sexual organs. It's not much of a stretch to think that sometimes the whole body is the wrong sex. The transgender person feels that he or she is in the wrong body. What a horrible fate that must be. But today they can have that little problem fixed.

Is this process about choosing whatever gender you want? In fact, the pope got it ass-backwards. It's about not being able to choose what gender you are. These people, young and old, don't choose a gender. They claim their appropriate gender, even at a young age. And if that doesn't align with the physical gender of their body, they tell us: I'm not a man, I'm a woman. There is no choice, no mystery. It's simply something they know as surely as they know their own names.

Sexual orientation and gender dysphoria aren't about choosing. They're about who you are. Choice plays no role. This is simply the reality of their bodies and minds. They are who god made them, including gay or transgender (if'n you want to think of it that way; there is no god, of course).

The pope understands nothing about this. For this reason, he should stick to non-sexual topics when he speaks. Why share his ignorance?
Posted by writenow at 3:25 PM No comments:

writenow
NY, United States
I'm Keith O'Connor and I write horror and science fiction. Science fascinates me, especially physics. I drool over physics. I'm a gay, atheist hippie and since the regular world is so boring, I spend my time creating fictional worlds that are a heck of a lot more interesting. It's great fun.

Wingnuts are free to comment. My only requirement is that you make sense and don't threaten anyone. I know that's tough for you to comply with, but there you go. Make sense and your comments will remain on the blog. Cheers!